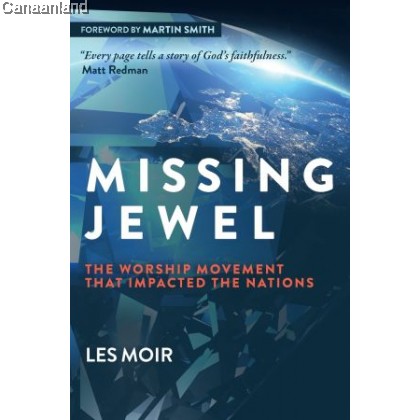 RM59.90
Missing Jewel: The Worship Movement that Impacted the Nations

Description
A. W. Tozer famously described worship as ‘the missing jewel of the evangelical church’. Since he penned those words in 1961, there has been an explosion of musical and lyrical creativity in churches across the United Kingdom.

From encountering God in house churches to declaring His praise in Stadiums, contemporary worship has transformed the British Church and spread across the world.
Les Moir had a front row seat for much of this time. Recording, producing and playing on landmark albums as well as shaping significant songs from 3 generations of worship leaders, including: Matt Redman, Martin Smith, Tim Hughes and Graham Kendrick.
In Missing Jewel he tells this story using his own experiences and inspiring first-hand accounts of the many musicians, songwriters and Church leaders who found themselves part of a journey that continues to bless and exhilarate new generations of believers.

Author: Les Moir has played a significant role in the international contemporary worship music community. As a mentor, A&R manager, record producer and bass player, he has encouraged and coached many worship leaders, musicians and songwriters. Les is married to Judith and they are based in Eastbourne, East Sussex. They have a son and a daughter; James and Isabel.
Reviews (0)
view all
back
0
0 reviews
Tags: BOOKS BWORS COOK WEB
Brands
Categories