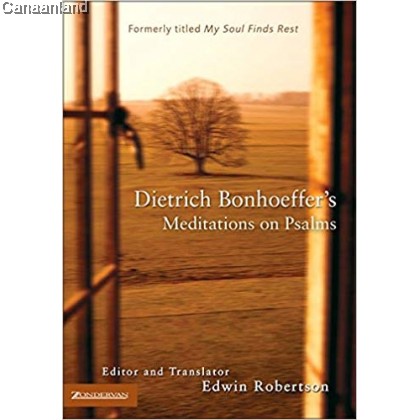 Description
"The only way to understand the Psalms is on your knees, the whole congregation praying the words of the Psalms with all its strength." —Dietrich Bonhoeffer

At the time of his execution by the Nazis in 1945, Dietrich Bonhoeffer was not quite forty years old. Yet already, his influence as a theologian was felt not only in Germany, but throughout the world. His interactions with the Psalms reveal a passionate heart and brilliant mind grappling with the Bible’s eternal truths and their application to human nature and temporal realities. Dietrich Bonhoeffer’s Meditations on Psalms is vintage Bonhoeffer: eloquent, incisive, encouraging, challenging, inviting us to find in the Psalms both a path toward repose in God and a call to Christlike living and practical action as followers of the Lord Jesus. Also available Dietrich Bonhoeffer’s Prison Poems Dietrich Bonhoeffer’s Christmas Sermons
Authors:
Dietrich Bonhoeffer (1906 - 1945) was a major writer and thinker in Germany between the wars. His many books of theology are still read and as influential among contemporary evangelical believers as the works of C.S. Lewis and Billy Graham: such works as The Cost of Discipleship, Letters and Papers from Prison, Ethics, Life Together, and Christ the Center. In 1939 he refused to take the loyalty oath to Adolf Hitler. Shortly after, he was invited to participate in a plot to assassinate Hitler. He was eventually caught, imprisoned, and executed.
Translator and editor, Edwin H. Robertson was born in London, England, in 1912, of Scottish parents. For many years he was involved in broadcasting and communications. He is the author of a number of books, notably on the Bible, broadcasting, and Dietrich Bonhoeffer. He is the minister of Heath Street Baptist Church in Hampstead, London, England.
Reviews (0)
view all
back
0
0 reviews
Tags: BOOKS BDEVO ZONDE WEB
Others also bought these...

Seeing with New Eyes: Counseling and the Human Condition Through the Lens of Scripture
RM56.90

Jesus’s Sermon on the Mount and His Confrontation with the World
RM57.90
Brands
Categories