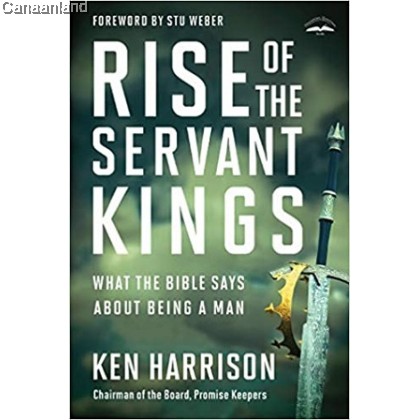 RM59.90
Rise of the Servant Kings: What the Bible Says About Being a Man

Description
The blueprint for becoming the man you were made to be—in marriage, family, work, friendships, with God in all of life.
“If you want a no-nonsense guide to getting manhood right, this is it.”—Evander Holyfield, four-time world heavyweight champion
Guys often approach life like it’s a pickup football game. They make up the rules as they go. They are sloppy rather than disciplined. Many lose interest and simply watch from the sidelines. Yet a man who knows who he was made to be and what he’s pursuing is a powerful force indeed.

In Rise of the Servant Kings, Ken Harrison, the chairman of Promise Keepers and a former Los Angeles police officer, gives men the keys to success and gets them into the battle. He explains what we’re fighting for and the path that will lead to victory by reinforcing the importance of holiness, humility, courage, generosity, masculinity, marriage, parenting, prayer, and more. Through scriptures, stories, and an energizing discussion guide, Harrison helps men remember what matters, defeat the Enemy, and pursue their God-given goals with intensity and passion.

God’s plan for you as a man is bigger than you’ve dared to imagine. Stop settling for simply getting by and prepare to rise up as a servant king in every area of life.

KEN HARRISON serves as the Chief Executive Officer of WaterStone, an organization that releases resources to support Christian humanitarian efforts worldwide. Currently WaterStone oversees donations of millions of dollars per month and manages a fund of $400+ million. He started his career as a Los Angeles police officer in the infamous 77th Division of South-Central Los Angeles, better known as Watts or Compton. There he received numerous commendations and awards. After leaving the LAPD in the 1990s, Ken went into business and built a small local company into one of the largest of its kind in the United States. He has served on multiple boards, and recently stepped into the role of chairman of the board of Promise Keepers, a well-known organization ministering to Christian men. Harrison is also the author of Victims & Victors. He has been married to his wife, Elliette, for 27 years and they have three children.
Reviews (0)
view all
back
0
0 reviews
Tags: BOOKS BMEN MULTN WEB
Categories