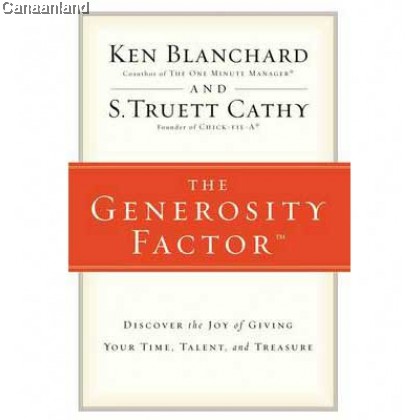 Description
In the tradition of the bestselling book The One Minute Manager, authors Ken Blanchard and S. Truett Cathy, entrepreneur and founder of Chic-fil-A restaurants, present The Generosity Factor―a parable that demonstrates the virtues of generosity.\It’s the story of a meeting between the Broker―a young man on his way up the corporate ladder who has the illusion of success, yet deep inside feels insignificant―and the Executive―the CEO of a very large and successful company who claims the greatest joy in his life is his ability to give to others. Thinking he might get a competitive edge by meeting with the Executive, the Broker’s worldview is turned upside down as he talks to the Executive and hears the principles that form his life. He calls it The Generosity Factor―a way to give time, talent, treasure, and touch to those in need. Providing a unique twist on what it means to thrive in business, at home, and in life, this story will forever change your definition of success.\Ken Blanchard is the coauthor of The One Minute Manager® and fifty other books, including the New York Times business bestsellers Gung Ho! and Raving Fans. His books have combined sales of more than eighteen million copies in more than twenty-seven languages. He is the chief spiritual officer of The Ken Blanchard Companies, a full-service global management training and development company that he and his wife, Dr. Marjorie Blanchard, founded in 1979. S. Truett Cathy is the founder and chairman of Chic-fil-A, a successful chain of quick service restaurants with more than 1400 locations. He is also the founder of the WinShape Centre Scholarship Program.\Ken Blanchard
Reviews (0)
view all
back
0
0 reviews
Tags: BOOKS BBUSS ZONDE WEB
Categories