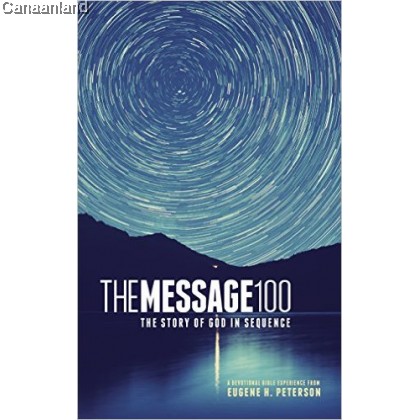 Description
What moves you?

Is it Beauty? - “God looked over everything he had made; it was so good, so very good!” (Genesis 1);

Is it Worry? - “It’s wonderful what happens when Christ displaces worry at the center of your life.” (Philippians 4);

Is it Injustice? - “God was moved to compassion when he heard their groaning.” (Judges 2);

Is it Suffering? - “Deeply moved, Jesus touched their eyes. They had their sight back that very instant.” (Matthew 20)

The Bible tells a story about moving―people moving from place to place, from good times to hard times to good times again. But more than anything, it’s a story of a God who is moved by love, and who moves―and who moves us―to make the world a better place.

Here in The Message 100 is the whole Bible―every single, moving word of it―laid out in 100 readings and arranged to reflect the unfolding story. Move through it at your own pace, and discover how God may be moving right there on the page, right here in your life.

Author: Eugene H. Peterson was born in East Stanwood, Washington on November 6, 1932. He received a bachelor's degree in philosophy from Seattle Pacific University, a bachelor of sacred theology from New York Theological Seminary, and a master's degree in semitic languages from Johns Hopkins University. He founded Christ Our King Presbyterian Church in Bel Air, Maryland in 1962, where he served as pastor until retiring in 1991. He then became a professor of spiritual theology at Regent College in Vancouver, British Columbia until retiring in 2006. His first book, A Long Obedience in the Same Direction, was published in 1980. He wrote over 30 books including Christ Plays in Ten Thousand Places, Eat This Book, Tell It Slant, As Kingfishers Catch Fire, and Every Step an Arrival. The Message: The Bible in Contemporary Language won a Gold Medallion Book Award. He died from complications of heart failure and dementia on October 22, 2018 at the age of 85.
Reviews (0)
view all
back
0
0 reviews
Tags: BIBLES MESSA NAVPR WEB
Brands
Categories