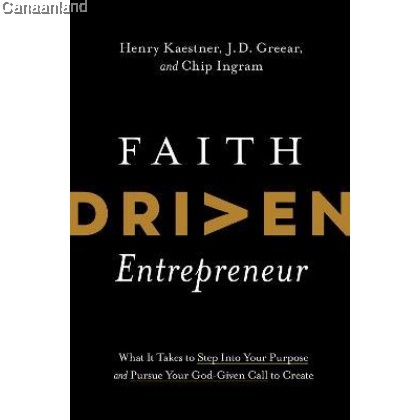 RM84.90
Faith Driven Entrepreneur: What It Takes to Step Into Your Purpose & Pursue Your God-Given Call, Hardcover

Description
Pre-order today for delivery some time in October 2022.

"I'm excited about Faith Driven Entrepreneur. Anyone who is following the example of their creator God can find echoes of their work in this book." --Lecrae
Entrepreneurship can be a lonely journey. But it doesn't need to be. God has a purpose and a plan for all those entrepreneurial dreams and creative gifts he gave you.
The work you do today--the company you've built, the employees you work with, the customers you serve, the shareholders you report to, all of it--serves as an active part of what God wants to accomplish on earth.
You are not alone in this journey. Join other faith-driven entrepreneurs as, together, we
Each book purchase includes access to the eight-session Faith Driven Entrepreneur video series, a discussion guide to encourage conversation among peers, and an invitation to join a Faith Driven Entrepreneur Group to meet other like-minded entrepreneurs.
Authors:

Henry Kaestner is a cofounder and partner at Sovereign's Capital, a private equity and venture capital management company that invests in faith-driven entrepreneurs in Southeast Asia and the United States from its offices in Silicon Valley; Washington, DC; and Jakarta, Indonesia. Prior to cofounding Sovereign's Capital, Henry was cofounder, CEO, and then chairman of Bandwidth.com and its sister company, Republic Wireless. Together, those companies have grown from $0 to $300 million in revenue. Prior to cofounding Bandwidth.com with David Morken, Henry founded Chapel Hill Brokers (a predecessor to ICAP Energy), an institutional energy derivatives broker that became the top-ranked electricity broker in the country. He is the catalyst behind the Faith Driven Entrepreneur and Faith Driven Investor websites, each of which has a podcast that has been downloaded hundreds of thousands of times in over 140 different countries. Henry has also been involved in a number of ministries and philanthropic activities. He cofounded DurhamCares; was a founding board member of Praxis, an accelerator committed to helping faith-driven entrepreneurs; and sits on a variety of business and ministry boards.Henry attends Venture Christian Church in Los Gatos, California, and serves as an elder in the Presbyterian Church of America. Henry lives in Los Gatos with his wife, Kimberley, and their three sons.

J. D. Greear is the pastor of The Summit Church, in Raleigh-Durham, North Carolina. Under Pastor J. D.'s leadership, the Summit has grown from a plateaued church of three hundred to one of over ten thousand, making it one of Outreach magazine's "top 25 fastest-growing churches in America" for many years running.Pastor J. D. has led the Summit in a bold vision to plant one thousand new churches by the year 2050. In the last fifteen years, the church has sent out more than one thousand people to live on church-planting teams—in North Carolina, across the United States, and around the world.Pastor J. D. completed his PhD in Theology at Southeastern Baptist Theological Seminary and served in Southeast Asia with the International Mission Board. He is currently serving as the sixty-second president of the Southern Baptist Convention. He and his wife, Veronica, live in Raleigh, where they are raising their four children.

Chip Ingram is the teaching pastor and CEO of Living on the Edge, an international teaching and discipleship ministry. Chip's direct, practical teaching style helps everyday believers apply God's truth to relevant issues, relationships, and challenges. Reaching more than a million people a week, his teaching can be heard online and through hundreds of radio and television outlets worldwide. In his winsome, down-to-earth way, he reveals biblical truth about God's perspective on marriage, understanding love and sex, raising kids, money, and how to live the Christian life in today's culture. A pastor for over thirty years, Chip is the author of many books, including Culture Shock, The Real Heaven, The Real God, The Invisible War, and Love, Sex, and Lasting Relationships. Chip and his wife, Theresa, have four grown children and twelve grandchildren and live in California.
Reviews (0)
view all
back
0
0 reviews
Tags: BOOKS BBUSS TYNDA WEB
Brands
Categories