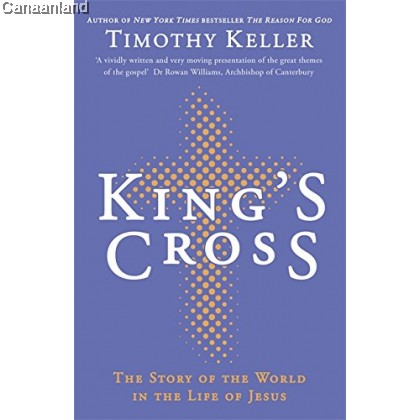 'Unpredictable yet reliable, gentle yet powerful, authoritative yet humble, human yet divine.'

Respected pastor and bestselling author Tim Keller takes a deep and thought-provoking look at the life of Christ. Drawing from Mark's gospel, he explains how Jesus' identity as king and his purpose in dying on the cross have meaning and significance on a cosmic scale as well as for the individual.

THE REASON FOR GOD gave a passionate and intellectually compelling case for God, while THE PRODIGAL GOD explored the gospel's central message of grace.

Now KING'S CROSS gives a captivating account of the person at the heart of it all: Jesus. Written in Keller's trademark authoritative yet inviting style, this book will unlock new insights for believers and unbelievers alike.

Timothy Keller was born in Pennsylvania and educated at Bucknell University, Gordon-Conwell Theological Seminary, and Westminster Theological Seminary. He became a Christian at university, was ordained by the Presbyterian Church in America and worked as a pastor for nine years.
He was asked to start Redeemer Presbyterian Church in Manhattan in 1989, and under his leadership the church's congregation experienced unprecedented growth from 50 to 5,000 members. His target audience consists mainly of urban professionals, whom he believes exhibit disproportionate influence over the culture and its ideas.
The 'Influentials' Issue of New York Magazine featured Dr. Keller as "the most successful Christian evangelist in the city by recognizing that young professionals and artists are 'disproportionately influential' in creating the country's culture and that you have to meet this coveted demographic on its own terms."
Timothy Keller is renowned for his clear, reasoned approach to Christian apologetics and his book THE REASON FOR GOD: BELIEF IN AN AGE OF SCEPTICISM was named Book of the Year for 2008 by World Magazine.
Timothy Keller lives in New York City with his wife Kathy and sons David, Michael and Jonathan.
Reviews (0)
view all
back
0
0 reviews
Tags: ACADEMIC BTHEO HODDE WEB
Others also bought these...

The Reason for God: Belief in an Age of Skepticism
RM34.90
Categories