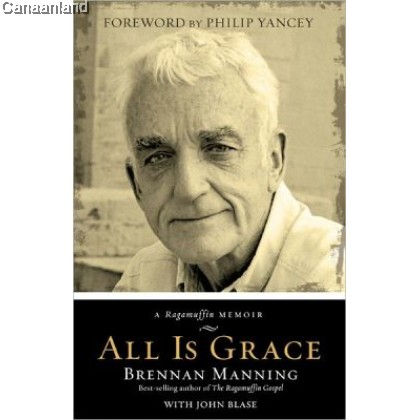 RM64.90
All Is Grace: A Ragamuffin Memoir, Hardcover

Description
On April 27, 1934, a little boy was born who grew up to become a vagabond evangelist in patchwork pants fiercely daring us to believe a line too good to be true—God loves you as you are and not as you should be. His name was Brennan Manning. He boldly preached of the love of Jesus vast, unmeasured, boundless, and free. And he always faithfully pointed to a tender, elemental fury that blows where it wills; in a word, grace.
But before the fame of his ragamuffin gospel, Brennan Manning was a son, brother, soldier, journalist, priest, husband, father, and friend. This is that part of the story, a necessary piece of the larger puzzle of grace. These pages tell the story of a man whose name was not always Brennan.

It has been over twenty years since the publication of The Ragamuffin Gospel, a book many claim as the shattering of God’s grace into their lives. Since that time, Brennan Manning has been dazzingly faithful in preaching and writing variations on that singular theme “Yes, Abba is very fond of you!”

But today the crowds are gone and the lights are dim, the patches on his knees have faded. If he ever was a ragamuffin, truly it is now.

In this his final book, Brennan roves back his past, honoring the lives of the people closest to him, family and friends who’ve known the saint and the sinner, the boy and the man. Far from some chronological timeline, these memories are witness to the truth of life by one who has lived it – All Is Grace.

Author: Brennan Manning spent forty years helping others experience the reality of God’s love and grace. It was at the heart of everything he wrote and did. A recovering alcoholic and former Franciscan priest, his spiritual journey took him down a variety of paths. He taught seminarians, spoke to packed arenas, lived in a cave and labored with the poor in Spain, and ministered to shrimpers in Alabama. Brennan is best-known as the author of the contemporary classics The Ragamuffin Gospel, Abba’s Child, Ruthless Trust, and The Importance of Being Foolish. He went home to be with the Lord in 2013.

Reflections for Ragamuffins: Daily Devotions from the Writings of Brennan Manning
RM44.90

Posers, Fakers, and Wannabes: Unmasking the Real You
RM29.90

The Wisdom of Tenderness: What Happens When God's Fierce Mercy Transforms Our Lives
RM56.90